Internet of Things: Beyond the Hype 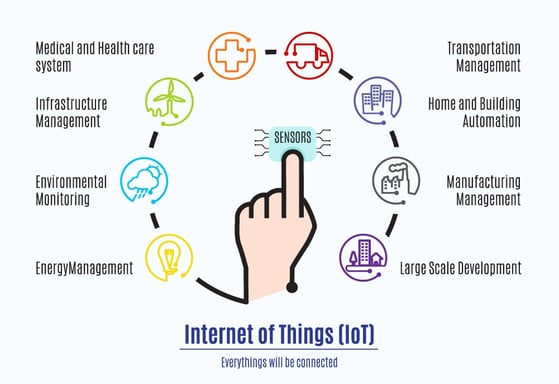 The amount of connected devices is projected to grow from 2 billion objects in 2006 to 200 billion by 2020. That’s the equivalent of 26 smart devices for every person on the planet! The time to sit up and take notice is now, so let’s take a look at the impact this trend will have on your business.

More than just a buzzword

Web 2.0, Big Data, Grid Computing: The media is quick to attach itself to the latest buzzwords, which can confuse readers and leave them wondering what all the fuss is about. Internet of Things (IoT) is no exception.

IoT references a range of diverse products and solutions that may at first glance seem unrelated to each other. Yet behind the hype, IoT is considered by those in the know to be an unstoppable trend that will affect all global business sectors in the very near future.

IoT in a nutshell

At its core, IoT is simply a network of physical objects (devices, cars, buildings, electronic items etc) that contain a microchip. The other key component is an internet connection via an internal or external gateway. Through sensors and software, the physical objects can monitor data, and send it to and from cloud-based databases to be monitored, analyzed and acted upon.

Think of it as a natural evolution of machine to machine (M2M) networks. Bringing that connectivity online gives you almost limitless possibilities.

IoT and the gold mine of Big Data

As each new connected device provides ever increasing amounts of highly valuable information, the industry of Big Data analytics is growing rapidly.

Pattern of Life (POL) data analytics can be used to profile users for different purposes. From a marketing perspective, it’s a goldmine.

This kind of analysis can save lives, but it also presents major privacy issues. Each country’s rules and regulations are developing and expected to change as people become more familiar with the topic. With this in mind, many companies are now collecting as much valuable information as they can before stricter laws are introduced.

Everyday life in the IoT era

According to Transparency Market Research, the global home automation market was valued at US $4.41 billion in 2014, and was expected to grow 26.3% annually from 2014 to 2020. As home automation technology evolves, your house will get smarter over time as more and more devices connect to each other. Expect more efficient use of energy and more self-learning devices that need less input from you.

Greenhouses can automatically monitor and optimize conditions to create the most productive environment. More intelligent agriculture has the potential to make a real difference to the expected food shortage problems as the world’s population grows.

Within healthcare, advanced wearables that monitor, analyze and report results for patients with chronic diseases look set to change the way doctors and patients communicate. Doctors can rely on hard facts rather than sporadic conversations with the patient.

Self-driving cars are no longer the realm of science fiction. Since 2009, Google’s self-driving car project has clocked up over 1.4 million miles. According to a Google study, their cars are involved in almost 25% less collissions than traditional cars in the United States.

How long will it take to get the world fully connected?

The backbone to connect already exists with cloud-based services in our current Internet structure. However, there are some natural limitations that will delay the adoption of a fully connected world.

How will IoT impact your business?

The era of IoT will force even the most successful companies in the unconnected world to face digital disruption. Despite only being in its infancy, the impact of IoT on traditional industries is undeniable.

Book stores were too busy protecting their existing product to combat Amazon’s Kindle. The taxi industry in New York was ripped apart by Uber. Kodak spent millions to protect their castle of film-based photography, which now stands in ruins.

The world is full of competent people who can create competing products with the digital features that your customers will soon expect. With low barriers of entry, all it takes is the right mix of innovators, a good understanding of market trends and willing investors, for ambitious digital-first startups to grab their share of your market pie in the blink of an eye.

If you are a profitable business with a portfolio of unconnected physical devices, your world will change.

The time for action is now.