The idea of wireless mesh networking is a captivating one: resilient, wireless networks with sufficient bandwidth to handle industrial data transfer requirements. But early development was restricted in terms of functionality and often difficult to use.

The mesh networking of today is a much better proposition and a viable choice for industrial and commercial applications. It gives huge potential for added value services in a system where direct connection between nodes is limited.

What is a mesh network?

The concept of a mesh network is simple to understand. In a general mesh network, all nodes cooperate in the distribution of data in the network, by relaying all the data they receive to all neighboring nodes. This concept can be refined by applying routing mechanisms that control which path to choose and the end conditions, for example. 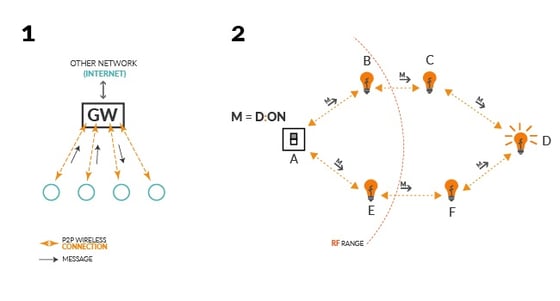 More Bluetooth devices can be connected to a mesh network, and together they will extend the range of every node in the network. A mesh network will increase the range because A communicates with D via B and C, when a direct connection between A and D would otherwise be out of range.

In principle, you could get a mesh link all around the world, with nodes placed just a few meters apart. The data transfer would take a while, but it would eventually get through.

From broadcast to full communication

The first generation of Bluetooth mesh networks uses a simple "broadcast" approach to send simple commands such as on/off to a group of devices. But there are limitations. Devices such as smart bulbs, displays, and projectors require two-way communication and firmware updates, which requires more data transfer ability.

Each device can send direct messages through the mesh to specific devices, without impacting the performance of the others.

When combined with gateway access to the Internet, a low power wireless mesh network could send its data up to the cloud, and this is where the added value begins.

The mesh network can collect data from locations that previously were difficult and expensive to reach with old technology. Now unit costs are so low that the investment is easily covered by the benefits, such as cloud-based monitoring, analytics and business decisions.

In more centralized network architectures where the gateway is a single point of failure, losing it kills the network. But the only way to shut down a mesh network is to shut down every single node in the network. This is a key factor in creating a robust machine-to-machine (M2M) industrial internet of things.

Issues to overcome with commercial mesh

Some wireless mesh firmware can run the access point and routing functionality on one unit at the same time due to the low bandwidth requirements for these kinds of applications. It drives cost of the solution down.

Every link between the nodes will consume a portion of the radio bandwidth and increase latency due to multiple hops, but careful planning and design can help minimize the problem. Additional high performance links can be added to “bridge” between parts of the network that are physically far apart. Such a solution is a trade-off between performance and complexity, therefore expense.

When multiple wireless devices use the same channel, the possibility of interference increases. By creating clusters of mesh networks on separate channels, the amount of wireless interference can be reduced.

Mesh is an exciting technology for industrial and commercial environments. We see companies who use it just for light control, but with good coverage and the ease of harvesting sensor data, a mesh network creates a lot of new opportunities.

This article was originally published June 2017