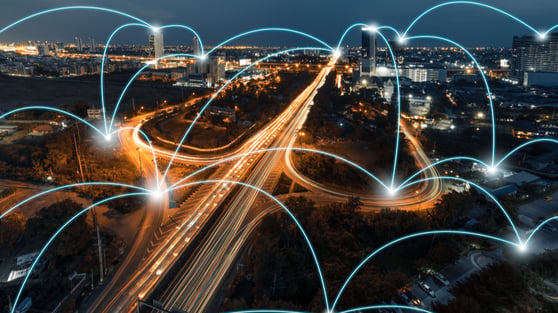 Dig below the hype and you’ll discover there are real benefits to mesh networking.

Some people in the industry view mesh networking as the next ‘shiny object’, nothing more than another excuse to raise prices. But mesh does deliver significant benefits over star or peer-to-peer networks and looks set to make a real impact on the industrial IoT and in the smart home in the years to come.

The reason is simple: mesh networks solve a specific problem. A conventional wireless router offers limited coverage if you can’t hardwire additional access points to it, which drives up complexity and expense in large spaces such an office building. On the other hand, mesh networks bring wireless connectivity to such a space far more simply than ever before.

The benefits of going mesh

While traditional networks use a small number of wired access points to connect users, a wireless mesh network is spread out among many nodes that connect with one another to share the network connection across a much larger area.

Mesh networking treats each base station as a node that exchanges information continuously about network conditions with all adjacent nodes across the entire set. This allows nodes that aren’t sending and receiving data to each other to still know all about each other. This knowledge might reside in a cloud-based backend or in firmware on each router.

Mesh networks don’t retransmit all the data passing through among a set of base stations. The systems on the market dynamically adjust radio attributes and channels to create the least possible interference and the greatest possible coverage area, which results in a high level of throughput.

Better efficiency comes with a price. Wi-Fi is standardized, but no two mesh systems currently on the market work with each other. Every major router manufacturer and some emerging tech startups offer mesh networking equipment, so right now there is a very difficult choice to make.

The latency, or the time it takes a message to get from a specific node to the gateway, can impact the design and management of your network. Latency becomes more of an issue in smaller, low-power networks because of the lack of processing capacity, so this is something to consider when designing your network.

Finally, because each node in a mesh must act as an endpoint and a router, it must draw more power to operate. Thus, if you have battery-powered, low-power nodes, a mesh may be difficult to deploy without a lot of network planning.

ZigBee is a wireless technology developed as an open global standard, which can be deployed in both star and mesh topologies. It takes full advantage of the IEEE 802.15.4 physical radio specification. If the sensor density is not sufficient, low-cost repeaters can fill in the mesh to provide more connections for the network. While there are many benefits to the use of ZigBee, there are concerns that have prevented a wider adoption including system cost, security, reliability, battery life and sensor management.

Z-Wave is another efficient, low-cost solution for device connectivity and management, geared primarily towards the smart home. A Z-Wave smart hub is required to function as the action point. From here, up to 4 “hops” between devices are supported in a mesh-like network.

Thread is another IEEE 802.15.4 based mesh standard primarily aimed at smart home applications. It is IPv6 based, and has a strong focus on security and reliability, with a system in place for healing the network if the leader node drops out of the network.

The smart home: A mesh-enabled smart home allows devices to be placed in their optimum location for usability, not just where the best signal is. There are challenges with the likely piecemeal approach to building a home mesh network, such as interoperability, but the future smart home will likely use mesh.

An exiting new ecosystem for the smart home is the Connected Home over IP project (CHIP), which has backing from many large tech companies such as Amazon, Apple and Google. Originally released in early 2020, the standard aims to be open and royalty-free, while using IP to better integrate with existing IP based networking equipment.

The project is managed as a working group in the Zigbee alliance but is intended to be transport agnostic so it can run over any transport layer that supports IP, such as Thread, Bluetooth or WiFi.

Read more: Why We’re Excited For Connected Home Over IP

Developing countries: For a country without an existing wired infrastructure, a wireless mesh network is a common-sense approach to connectivity. Solar-powered nodes could connect to a satellite internet connection to keep entire communities connected.

Education: Remove the need to wire up old buildings and offer connectivity to researchers, teachers and students wherever they are on campus.