Pre-launch products with a hackathon 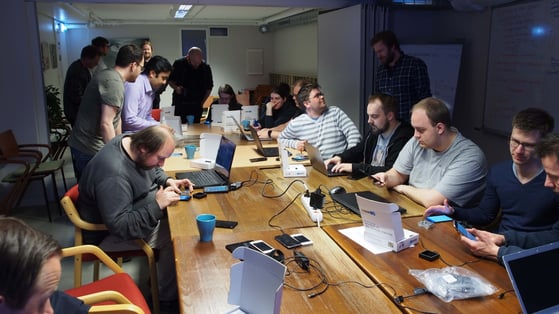 A hackathon is a great opportunity to soft launch your IoT product to a group of dedicated, curious users. You’ll get the chance to obtain valuable user testing feedback by observing your target market actually using the product.

Here on the Get Connected Blog, we have long recommended IoT startups test out their connected products with their target market during the development phase. We like to practice what we preach, so this month we hosted a pre-launch event for an upcoming Nordic Semiconductor product in Trondheim, Norway.

Rather than glitzy showmanship, slick presentations and shiny brochures, we chose to take our prototype to the people who will use it, to gain valuable feedback before we launch the product to market.

A connected product for software developers

Due for global release later this year, Nordic Thingy:52 is a product to help facilitate IoT development. It fills the gap between a consumer product and a full dev kit, and is aimed primarily at software developers who want to play with hardware, but don’t want to mess about with low level firmware/hardware development (like compiling, flashing and HW design).

The device contains multiple sensors and even a microphone, and can be interfaced with using Nordic’s example apps (iOS, Android, and web) and through integration with If This Then That (IFTTT). Developers are even free to adopt the available Bluetooth API, making their own apps or web pages connect directly to the device as well.

The product is at an advanced prototype stage and has undergone thorough testing at the Nordic Semiconductor HQ, but this was the first time we let the product out “into the wild”. Ten devices were shared among members and friends of Hackheim, a community of makers based in our home city of Trondheim, Norway.

After a very brief presentation from Nordic Semiconductor’s R&D Engineer Joakim Tønnesen, the participants were let loose. Merely minutes later, the devices were flashing, bleeping, and interfacing with everything from email accounts to Slack channels.

User feedback was gained directly by speaking to participants about their experiences with the product, but also by observing their behaviour, including any troubles they were having and how they looked to overcome them.

“It’s been a really interesting session. We created a quick integration between the button and a Slack channel, to work as a doorbell for an office. We’re also looking at broadcasting a URL through the doorbell with the physical web. This is the perfect place to test such functionality.” - Torbjørn Kvåle & Snorre Vestle, Hackheim members

“I love events such as this, where you can tinker with things that are not really finished yet. It’s fun to play while the Nordic Semiconductor engineers are watching. It’s a bold move for the company to do this and great for them to reach out within this community. As for the device, it’s simple to use and has all the sensors you could possibly need to get going with an IoT project. I really see the potential.” - Per Christian Kummermo, Senior Engineer, Telenor

“We are electronics engineers and like to experiment with sensors and stuff. It’s cool that you can try the sensors right away without setting things up and programming firmware, so you can get the sensor outputs right away on to your website. It will be very useful for software and hardware people to collaborate on projects. The software engineer can use the Thingy to simulate the hardware until it is ready.” - Ole Jørgen Kleive & Petter Haugen, NTNU

“When it’s launched, I might pick up a few to have around the house with a Raspberry Pi at the centre, and a Bluetooth connection so they are always online. I would use the devices as sensors, connect them to relays and use them to turn lights on and so on. It could be easier and more economical to do this than buying a finished product!” - Julian Silden Langlo, Computer Engineering Student, NTNU

Huge value in a hackathon

For the Nordic Semiconductor team, the event was deemed a huge success.

“It was great to get the opportunity to show off one of our future projects within our community here in Norway. Everyone here bought into what we were trying to do and came up with some use cases we hadn’t yet thought of, and identified some areas for improvement. That feedback is worth many times more than the cost of running such a session.” - Project leader Joakim Tønnesen