The first digital pill is approved 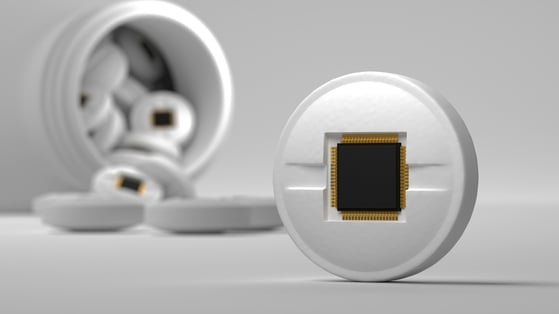 American authorities have approved the world’s first digital pill. The pill will help doctors monitor that drugs have been taken, although some are concerned with privacy.

The Food and Drug Administration (FDA) has approved the first digital pill for use in the US.

The Abilify MyCite pill is fitted with a tiny sensor that, once digested, communicates with a patch worn by the patient. The patch then transmits data to a smartphone app, which the patient can upload to a database for their doctor and other authorized people to see.

How the pill works

Every pill contains a tiny sensor chip known as an Ingestion Event Marker (IEM), which is activated when coming into contact with stomach fluid. It emits an electrical signal that is picked up by the patch. Data, such as the time the pill was taken and the dosage, is then sent from the patch to a smartphone app via Bluetooth.

Such disposable chip-scale packages are only viable from a cost perspective because of the on-chip baluns and excellent energy performance of the Bluetooth solution i the patch. A powerful M4 CPU will allow the work to be completed rapidly before turning back to sleep to conserve energy. As the patch must be replaced every seven days, keeping the cost down in such devices is a priority.

The Abilify drug treats schizophrenia, bipolar disorder, and some cases of depression, so the benefits of healthcare professionals monitoring usage and/or dosage are clear. Such a system could also be expanded into target groups who may not easily be able to monitor their own intake, such as the elderly.

Safety of the pill itself doesn’t seem to be an issue, as the sensor is so small to be easily passable naturally. Experts though, have expressed concerns over what the pill might mean for privacy. While not so concerned about this specific pill, some experts believe it is a step towards a world of mistrust.

Ameet Sarpatwari from Harvard Medical School told The New York Times the digital pill “has the potential to improve public health”, but that, “if used improperly, it could foster more mistrust instead of trust.”

According to multiple media reports, the FDA is anticipating a rise in approval requests for other digital pills, and they plan to hire more staff with software development knowledge to meet the demands of medical IoT.

The patient’s doctor and up to four other people chosen by the patient can access the information from the smartphone app. The patient can grant and revoke access at any time, but what happens when the patient is unable to make that decision?

The new EU GDPR regulation coming into force in 2018 strengthens existing requirements in relation to data subject consent, and apply to any business with a customer in Europe.

The regulations make it clear that consent cannot be assumed, and that consent should not be regarded as freely given if the data subject has no free choice, or is unable to refuse consent without a negative impact. It’s these last points that could be most relevant for connected medication and connected medical devices, and mean that use of such a pill cannot be as widespread as healthcare professional would like.