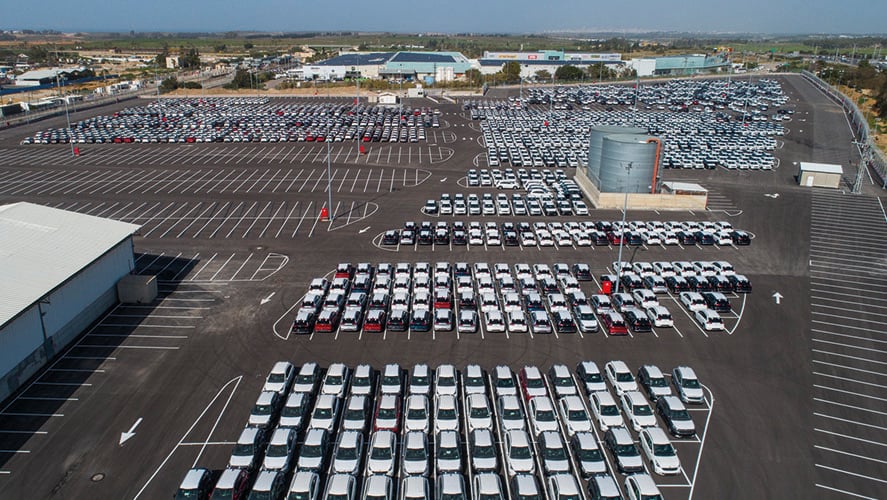 Kia Israel was sure there was a better way than the traditional manual system of vehicle tracking. They found it in ViLOG, a product from Israeli software services firm, Sogo Services.

It’s no secret that cars are big business. According to the Global Automotive Outlook’s 2017 report, the automotive industry is set to achieve 114 million annual sales of new vehicles worldwide by 2024. And Statista estimates that the total global sales of new motor vehicles will be worth just under $9 trillion by 2030.

That’s a lot of cars. And if any of those cars are misplaced, dealers and importers lose not only money and time; the goodwill of their customers is also at stake.

Kia Israel keeps cars they import from the manufacturer in a bonded lot in Tel-Aviv for up to a year. Sometimes with close to 10,000 other units. The car remains in the lot until a customer purchases it. Then the vehicle is registered, processed through customs, and shipped directly to the dealer for delivery to the new owner.

Cars delivered from the manufacturer look identical in all but color. They don't have license plates, and the only way to tell units of the same colour apart is by checking the vehicle identification number stamped on the chassis by the manufacturer. Adding complexity to the mix, the yard experiences over 700 unit movements each day as stock is added, removed, and rearranged. Processing one vehicle increases the chaos as it can mean moving three or four others. And they don’t always get returned to their original spots after the target vehicle has been driven away.

Analog methods of tracking are inefficient, to say the least. Every time a car is moved, staff need to break out the ballpoint and update stock location documentation. Manually recording these movements is time-consuming and prone to human error. A slip of the pen can mean cars getting lost for days at a time, costing money, time, and customer goodwill. No surprise then that Kia Israel was keen to consign handwritten tracking to history.

Read more: How to Track Your Missing Assets

Some tech-based vehicle tracking systems are effective but require substantial investment in infrastructure. Active RFID tagging, for example, helps track car movements in real-time but requires batteries, on-site sensors, and a power supply. When dealing with car inventories that reach five figures, that’s a minimum spend of tens of thousands just for the RFID tags alone, excluding any sensor infrastructure.

And for many importers, adding such infrastructure isn’t an option, as many car lots are short term lets of rented properties. Any infrastructure considered would require an expensive conversation with the lot’s owner - and if the lot gets moved, the infrastructure would have to move with it.

Found in an instant

As staff members work in and around the bonded lot, their smartphones receive the unique vehicle ID across the Bluetooth LE link plus an approximate measure of the car’s position relative to the handset. Then, using a hosted app, the smartphone relays its GPS location to a Cloud-based server. Here the information is quickly processed to give users an up-to-date location map of every single vehicle in the lot.

The Nordic nRF52810 SoCs used in the beacons are configured to transmit once per second. This extends battery life up to 12 months - the longest time a car is likely to be on the lot. In the unlikely case that the batteries do fail before vehicle shipment, the system also includes a “last known position” feature that helps staff locate the car and replace batteries.

According to Sogo Services, the ViLOG system has improved Kia Israel’s efficiency:

Making use of what’s on hand

Because of the ubiquity of smartphones in the modern workforce, they can be used as readers and gateways in tandem with the Bluetooth LE beacons to reduce inventory management infrastructure. This, in turn, pushes down the barrier to entry for smaller deployments.

There’s no proprietary hardware involved because the infrastructure comprises smartphones and Bluetooth LE tags. And the use of Bluetooth makes it easy to ramp up from a small operation involving a limited number of vehicles to a full-scale solution covering tens of thousands.