Voice control in the smart home 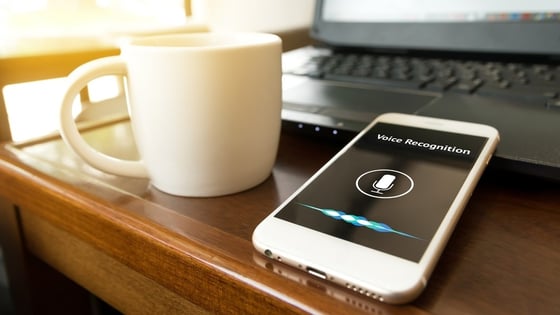 In just a few short years, voice control has finally come of age as a technology that can make a real difference in people’s lives. With the tech now in place, what does the future hold for voice automation in the smart home?

In 1952, a computer understood voice input from a human being for the very first time. The ‘Audrey’ system at Bell Labs was limited to understanding digits spoken by a single voice but it was an exciting breakthrough that started the long journey to where we are today.

Even as recently as the turn of the century, voice recognition was expensive, inflexible and inaccurate because systems lacked the necessary processing power.

The processing power of the cloud

The processing power of these servers, intelligence from search and the ability to crunch data across millions of users helped the era of natural voice processing to truly begin. Apple’s Siri followed swiftly and voice control seemed poised to replace fingers on a screen.

Yet uptake and use of these services was still slow. There wasn’t much you could do that was easier or quicker than just using your fingers, not to mention the social stigma of talking to your smartphone in public.

It wasn’t until Amazon released the Echo smart speaker – with Alexa, a voice-controlled personal assistant – that voice control started to gain real traction. At last, people could use their voice to ask useful things – ‘Alexa, what’s the weather going to be like tomorrow?’ – speaking naturally, more quickly than opening an app on a phone, and in a private setting.

> Read more: The next consumer IoT giant may surprise you

Echo has been joined by the Google Home Smart Speaker with Apple rumored to be working on a similar device. There has since been an explosion in the number of devices that can be controlled using our voice.

So far, it mostly involves setting up the product in the hub’s app so that it knows what to do when you say ‘Turn on bedroom lights’ but we are starting to see more and more devices that have some kind of native voice-control.

Context-awareness – changing the response based on other factors – is the next step in voice control. If people are out and about, they can say to their phone ‘Get me home’ and the phone will check their location, check transportation options, and give them the best options. It could even go further and order a ride home simply from one voice command.

Adding voice control to your product

Unless you have vast resources and experience in cloud computing and data processing it’s likely your voice control will be handled by one of the major players. You have three choices:

The most common option is to take a cloud-enabled device like the Philips Hue that comes with a gateway and connect this to the voice processing engine of choice, such as the Alexa Smart Home Skill API. Some devices, such as the Ikea Trådfri, will soon support the big three - Amazon Alexa, Apple HomeKit and Google Assistant.

Collecting voice data in the device itself and passing it off for processing and response is more appropriate for larger, more complex appliances that may be located out of listening range of the smart hub.

An alternative is to integrate voice service into your product by including microphones, speakers and cloud connectivity. This allows for “wake on command” products that consume very little energy when not enabled.

Finally, you could use an open standard communication protocol and add your product to work with one of the hubs directly. This is ideal for simple devices like lightbulbs.

Important aspects to consider are bandwidth requirements (which may impact connectivity choice) and security. A series of news reports have suggested Alexa users have accidentally ordered things from Amazon based on casual conversations with friends and family. Whether these reports are true or not, the extent to which a device listens to its users should be carefully considered.

Voice control has rapidly progressed from ‘technology of the future’ to the hottest tech of today. With more devices taking advantage of it, people are getting accustomed to talking to their devices and the market is moving at breathtaking pace. Now is the time to make sure you’re finding your voice and not left whispering in the wind.

Kjetil is the Director of Product Management, overseeing all product roadmap and product marketing for Nordic Semiconductor.