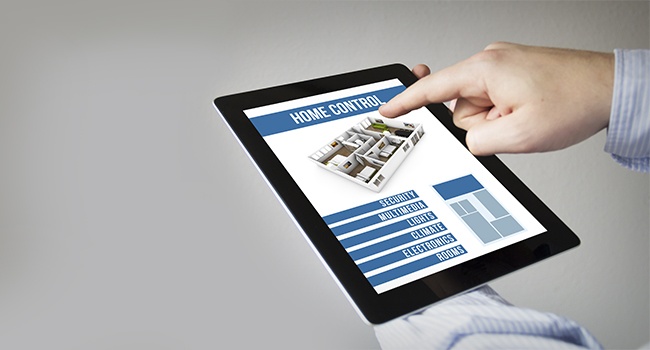 “…With HomeKit, you can group devices and change into scenes, and then with Siri integration you can say something like “Get ready for bed”, and be sure your garage door is closed, your door is locked, the thermostat is lowered, your lights are dimmed… That’s HomeKit”

Some examples of HomeKit-controllable devices:

Any task that is performed by people on a regular basis is an ideal candidate for a connected product.

HomeKit lets the user create scenes. A scene represents a group of actions to apply to various connected appliances on demand. For example, there may be a scene called “Leaving home”. If the user tells Siri ‘I’m leaving home’ it will know to turn off the lights, lock the doors and lower the thermostat.

Other examples might be scenes like “wake up”, “movie night” or “bedtime” all configured to change the settings of various devices with a single command. Homes get more “intelligent” over time, as more smart devices are connected.

Use triggers in HomeKit

In addition to telling Siri how to control the home with voice commands, users can also set up triggers to do things automatically:

These kinds of settings can all save energy, and costs, in addition to making daily routines easier.

Products can also be set up to trigger based on additional conditions. So the system could turn on the bathroom heater at 6.00 AM but only if the user is at home, or it could turn on lights when someone walks in the kitchen but only after sunset.

When HomeKit was first introduced, about 15 leading manufacturers of home automation products were mentioned as compatible with the framework. A year later, only five manufacturers, with less than 20 different devices, were listed as approved. One of the main reasons for the slow progress was Apple's strict security demands to get products approved for HomeKit.

As of 2016, over 50 brands worldwide have been reviewed and approved by Apple for HomeKit. Viewing the Apple Home automation store will show you what sorts of things are available and may give inspiration for your own business.

HomeKit and the importance of Security

Apple knows that consumers are skeptical about making things like their door locks remotely accessible through a phone. By only approving devices that use robust encryption, authentication and device approval they can reassure users that only members of the household can access the devices and no one can work out private information by, for example, seeing what time the thermostat is set to turn on or off.

The original plan from Apple was to allow the device makers to implement their own security solutions. After some consideration, they decided to require all manufacturers to follow strict security requirements, and include Apple’s ‘Made for iPod/iPhone/iPad (MFi) chip, to get approved as HomeKit compatible. This led to delays for many manufacturers in getting their products certified, as they needed to make the necessary changes.

Implementing HomeKit in your products

When purchasing hardware for your product, you need to make sure that either it, or the controlling bridges/hubs, meets Apple’s requirements for HomeKit-certification.

How to create your own app for HomeKit

When your product is approved by Apple, it will work with Siri after pairing. But you will need to create an app to do this.

You can take advantage of iCloud for Developers to keep your apps connected and up to date across iOS, OS X and the web via CloudKit JS.

If you are connected to a higher education institution, you might qualify for the free iOS Developer University Program from Apple as well. This includes access to useful tools for creating innovative applications.