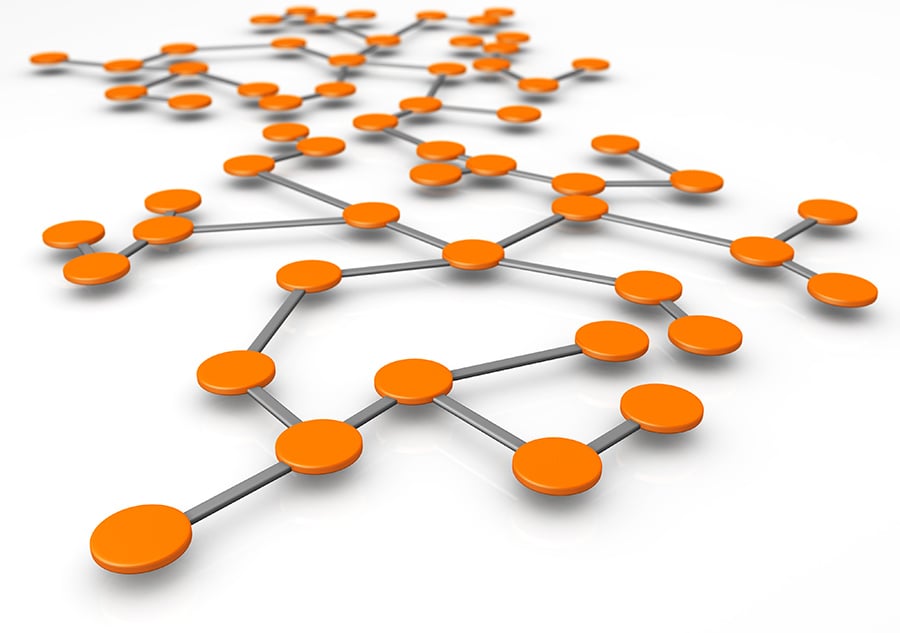 Choosing the most appropriate network layout is vital to the efficient operation of any system. For wireless networks, this is highly relevant as it is tightly coupled to factors such as latency, power, speed and redundancy.

Modern networks consist of many different devices of various types. Whether it’s a router, a smartphone, Bluetooth headphones or smart light bulbs, each device on a network is known as a ‘node’.

Network topology describes how different nodes in a network connect to one another and communicate.

There are a great number of network topologies in existence, each with different strengths and weaknesses.

The simplest network is point-to-point. This is a single network connection between two nodes. In reality, it’s now pretty rare to want to connect only two nodes except in certain critical or special applications. A modern example would be the kind of ad-hoc connections made via Bluetooth for things like file sharing service or remote control of e.g. model airplanes.

A basic way to add more nodes to our network is by daisy-chaining, which comes in two flavors: Linear and Ring.

Linear daisy-chaining connects the third node to one of the existing nodes, the fourth to the third, and so on. It’s a simple method but quickly becomes impractical as you add more nodes.

Daisy-chaining could be used to create a network for connected devices, such as smart light bulbs, but there are better solutions for most use-cases.

Solutions for scaling up

Once we add a large number of nodes to our network, point-to-point and daisy chains become inefficient. If two nodes that are on opposite sides of a 1,000-node ring want to communicate then their data has to be passed through 500 other nodes first. The daisy chain is also susceptible to errors as a single failing node may cause massive disruptions, and in worst case cause messages not to come through at all.

In Bus topology, we connect all devices to a central backbone (known as a bus). This is similar to a Linear topology but with a single line having multiple single branches. This is a common topology in wired networks but doesn’t have any real analogues in the wireless world.

While it’s important to understand these topologies, none of these are very common in the modern wireless ecosystem. Moving further, we will visit more common architectures.

The topology that is most useful for wireless networking at the moment is the Star, in which each node connects to a central hub that distributes the data wherever it needs to go.

The most obvious example of this would be a home network. All of the nodes – phones, printers, tablets etc. – connect to the wireless access point (hub), which is usually both a router for the local network and a bridge to the Internet. Star networks are highly suitable for connecting both wired and wireless nodes together seamlessly.

This is a simple way of implementing a wireless network, but it has two major challenges. The hub at the center of the system is a single point of failure. If the hub fails, the entire network ceases to exist, leaving devices unable to communicate at all. It also relies on devices being within a certain distance of the hub.

To add resilience, as well as range, we need to think a little smarter.

There are two types of Mesh network – full and partial. In a full Mesh network, each node is connected directly to every other node. This is great for resilience but does nothing to add range. These are only really implemented in, for example, military networks where 100% redundancy is essential.

Partial mesh networks, on the other hand, involve each node being connected to one or several other nodes. Being connected to multiple other nodes adds resilience, as there is no single point of transmission failure. It also improves range as node A may be out of direct range with node C, but the message may still get through via node B.

Mesh networks are the biggest area of development in the IoT as they theoretically allow an infinite number of devices to be connected across infinite distance. Using Mesh networks, resilient smart homes, smart businesses and smart cities become a real possibility.

Nowadays, in reality, examples of single network topologies are increasingly rare. Most networks combine one or more different topologies to create a hybrid.

Tree networks connect Star networks together on a Bus network. This is often used when there are several clusters of nodes such as in a WAN. In such a case, each node is connected to a router to form a Star network and then the routers will be connected together to create a Bus connection between them. This can also be done with a Snowflake network, which connects multiple Star networks to a single central node, like a Star of Stars.

The Internet is the ultimate hybrid network. It includes many individual networks of each type, with Bus, Star, Ring and Mesh all combining together.

The key to increased adoption of Mesh networking is standardisation. As players in the mesh domain have rushed to capitalize on the need for Mesh networks, multiple standards have arisen as they commonly do. Many different standards will co-exist in this segment, although we will likely see that one emerges as the de facto standard.

A current smart home might have a Mesh network of light bulbs from one vendor and a Mesh network of heating controls from another vendor, that both connect to the regular Star network allowing smartphones to control them. Clearly this is inefficient and helps no one in the long term.

The main goal is to have a standard Mesh network that all nodes, be they smartphones, laptops, light bulbs or sensors, can join. There’s a way to go before this happens, but once it does, the Internet of Things will finally be able to reach its true potential.

This article was first published in December 2018