Before evaluating the various connectivity options for your IoT project, it’s important to understand the functional architecture of IoT solutions.

IoT solutions require secure, bidirectional communication between devices, which could number anywhere between two and several million. A back-end solution that provides functions such as management, monitoring, analysis and automation is also required.

The architecture is quite different from the typical web system and involves several layers: 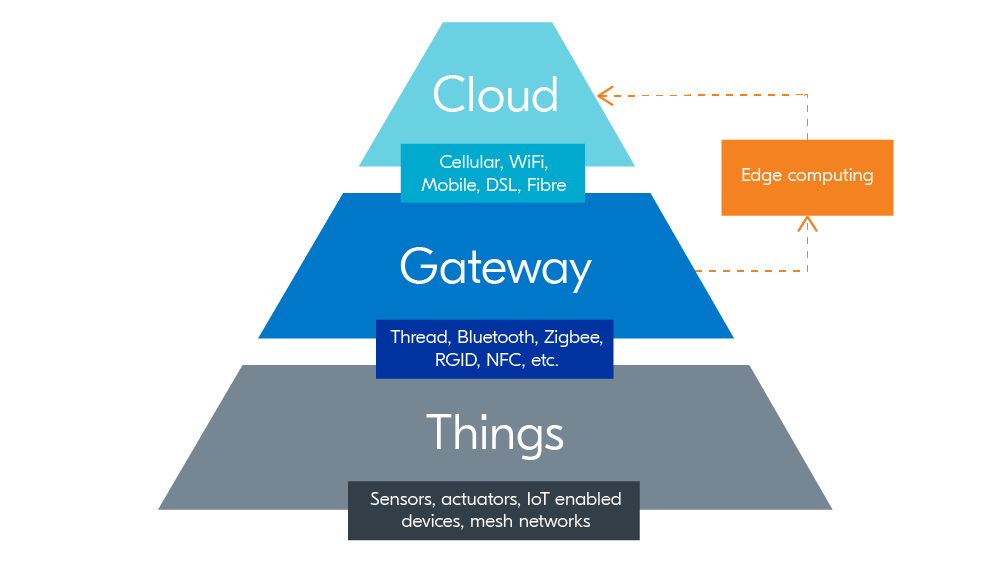 The things: sensors and devices

In a typical home IoT solution, a smart device such as a refrigerator, thermostat, washing machine or car has an embedded communication unit that connects to a network, thereby enabling the device to interact with a cloud-based application, applications on other platforms such as smartphones, or other IoT devices.

In a typical home environment, sensors collect data which can be relayed back to the owner for information or for direct control. For example, the temperature in all rooms of the house may be displayed on a mobile device. If actuators are also part of the IoT network, the sensors may control them. If the temperature pass above a user defined threshold, the heaters may be turned off and the window blinds lowered. Having a number IoT sensors and actuators lets the user define interesting ways of interactions, which may increase comfort and reduce power consumption in the home.

Seen from a manufactures perspective, having IoT enabled devices may be beneficial as well. They may automatically report errors, which could allow the vendor to contact you to schedule a repair even before you knew there was a problem. The vendor may also aggregate and analyse data to see where the fault originated from.

In industrial and commercial environments, sensors collect data from the environment or a specific object under measurement, to be processed and monitored by applications. Actuators can also intervene to change the physical conditions, for example by switching off power or adjusting valves.

In many cases it’s not easy to provide wired power to a large number of sensors in an IoT system. For battery operated sensors, a low power communication protocol such as Bluetooth Low Energy is a common way to connect the sensors to the next layer in the puzzle.

Another option growing in popularity is mesh networking. Rather than each individual sensor connecting directly to a gateway, nodes on a mesh network communicate with one another. Range extension and improved redundancy are among the benefits.

Because the nature of an IoT system is very different from web, desktop, or even mobile systems, an intermediate element is sometimes required to sit between the sensors and devices out in the field and the applications situated in the cloud. If LTE/NB-IoT is used within the device itself, they connect directly to the internet so no gateway is required.

Most gateways are connected to the Internet using Wi-Fi or a wired ethernet connection, although cellular is expected to be a popular option in the years to come.

There is no one gateway solution. It may be a standalone device or sensors could be incorporated into it. What’s important is the software that collects the data, processes it (message filtering and aggregation) and sends the results on to the cloud. As such devices are often used in remote or harsh areas, they should be designed with special attention on failure and recovery.

The data processing required by the IoT solution most likely takes place in cloud-hosted applications. The following features may be relevant for the back end application:

There is often an additional layer named presentation or business intelligence, which is what allows non-technical business users to interact with the solution through dashboards and reports rather than with the application itself.

Depending on the solution, you will be able to check the individual status of any device connected to the network, view real-time and historical data, and run reports. This layer also allows for integration of the IoT solution into other business systems.

While being able to crunch large amounts of data off-device brings significant benefits, the cloud isn’t always available or you may require quicker response times.

This is where Edge computing can help. Put simply, the Edge is where the data is produced and initially aggregated – static gateways, sensors, computers, smartphones, etc. It works like a triage system, collecting the data and processing what it can, so only the material that really needs the power of the Cloud is sent.

Such pre-processing systems may be located in remote offices, but generally they are situated close to the physical data collection devices. Making use of Edge computing can help increase the security of connected products and sensors by minimising network exposure.

This article was first published in December 2018.